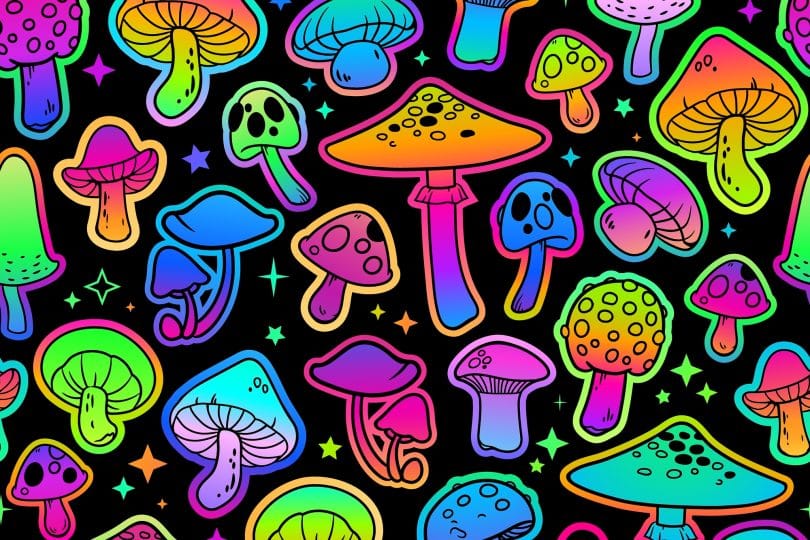 As amanita muscaria products grow in popularity, curious consumers are wondering how the active ingredient in these shrooms, muscimol, compares against the much better-known psychedelic mushroom compound, psilocybin.

In this article I’ll be outlining the differences and similarities between both types of psychedelic mushrooms, as well as offering a bit of my own personal experience with each. Let’s take a closer look.

Meet the mushrooms: Psilocybin vs Amantia

When it comes to getting high with mushrooms, there are two primary types that people use (and one is much more common than the other): Psilocybin mushrooms and Amanita mushrooms. Psilocybin mushrooms are undoubtably more popular, and their acclaim is steadily growing. I recently had a conversation with a friend of mine who grows and sells shrooms and he said that during December 2022, he had more requests for shrooms than he did throughout the entire year up to that point. He is currently sold out till the next flush is ready sometime in the spring.

Psilocybin mushrooms are a polyphyletic group of informal fungi containing psilocybin. There are a few different biological genera of psilocybin mushrooms such as Psilocybe, Panaeolus, Inocybe, Pluteus, Gymnopilus, and Pholiotina. There are many different types of psilocybin mushrooms – in total, 116 species have been documented. Out of those, the majority are found in Mexico (53 species), with a pretty even distribution throughout various other pockets of the world: Canada and the US (22), Australia and associated islands (19), Europe (16), Asia (15), and Africa (4).

Standard characteristics of these mushrooms include dark spores, small caps with dark gills underneath, and long, slender stems. They are often unassuming in color (shades of grey, brown, and white with hints of blue from the psilocybin production) and general appearance. Despite being found all over the world, there are some specific conditions in which they thrive, mainly subtropical humid forests.

Psilocybin mushrooms have a very long and colorful history, having been used spiritually and therapeutically in several indigenous cultures. They were depicted in Pre-Columbian sculptures and petroglyphs found in the Americas, as well as in Stone Age-era rock art in Africa and Europe.

Then we have Amanita muscaria; often referred to as the fly agaric, fly amanita, or simply amanita mushroom. It is a member of the Basidiomycota family of fungi, of the genus Amanita. This mushroom species gets its common name from its ability to attract and kill flies and possibly, mosquitos. The fly agaric is native to the temperate and boreal regions of the Northern Hemisphere including Europe, North America, and Siberia/Northern Asia.

It’s a highly adaptable mushrooms species that can now be found throughout the world, and it’s closely tied to various deciduous and coniferous trees, commonly found growing under birch and pine. Amanita muscaria mushrooms have round, often dome-shaped, red caps with white spots and white gills. They are, without a doubt, one of the most recognizable of the toadstool mushroom species. You can spot Amanita muscaria mushrooms in the Mario franchise games, the Alice in Wonderland mushroom scene, and many other cartoons and animated games.

Although they have many features that make them easily discernible from other mushroom varieties, there are several known subspecies of Amanita muscaria, some more potent/toxic than others. Additionally, new DNA fungi research has discovered that many of the mushroom species often believed to be muscarias are actually entirely different species, like the peach-colored fly agaric, which keeps its common name although it is not a fly agaric at all.

These mushrooms have an equally interesting history and strong connection with Christmas. As the story goes, Siberian shamans riding reindeer were dropping bags of mushroom into the locals’ yurts during the Pagan winter solstice celebrations. Amanita mushrooms were sacred to the indigenous people of Siberia and the Evenki Northern Tungusic shaman used them regularly during ceremonies and rituals.

Psilocybin, further explained – Breaking down the compound and the high

Again, Psilocybin is the primary compound found in most psychedelic mushrooms and truffles. It’s a basic tryptamine hallucinogen with properties similar to lysergic acid diethylamide (LSD) and mescaline, although the chemical structure is somewhat different. Research over the years indicates a common mechanism of action through serotonergic (5-HT) pathways. Psilocybin is a strong agonist at 5-HT receptors which are located within the thalamus and cortex of the brain.

The effects kick in about 30 minutes after consumption and last anywhere from 4 to 8 hours, with a roughly 1-hour-long peak somewhere in the middle of the trip. The threshold for intoxication with psilocybin is around 40 mcg/kg of body weight. With most strains, this is approximately 2 to 4 grams for a decent psychedelic trip, although some people do what’s known as “heroic doses” which are 7 grams or more in one sitting.

Thank you for making your way over. Remember to sign up for the Cannadelics Weekly Newsletter for updates direct to your email; and to access deals a wide variety of cannabis and psychedelic products. Remember to always get high safely and responsibly.

Psilocybin mushrooms are typically eaten dry and have a taste that many people find intolerable (I personally don’t mind it, but it’s a deal-breaker for a lot of potential shroomers). They often get mixed up with other foods to make them easier to eat. Luckily, these days you can get psilocybin in many different forms: natural from the mushrooms themselves, in extract form, in powder form (capsules), various edibles, and so on.

My personal experiences with psilocybin mushrooms have been pretty amazing. Although I’ve had a couple trips that could be classified as “bad”, they weren’t horribly scary or overwhelming, which is a common fear for people who are thinking about trying shrooms for themselves. For me, taking low doses resulted in anxious and slightly distressing highs, whereas higher doses (to the point that I got at least a little bit of visuals) produced much more positive and introspective trips.

In A. muscaria, the psychoactive ingredients are muscimol and ibotenic acid. Muscimol activates the major inhibitory neurotransmitter system, gamma amino butyric acid (GABA). As an inhibitory system, muscimol works by suppressing the activity of neurons in the brain.

At low doses muscimol is more similar to a dissociative drug or alcohol, rather than a psychedelic. At high doses it is said to have more psychedelic effects (some people also say it’s similar to hypnotic drugs like Ambien).

Now, this is where things get a bit confusing. What is considered a “low” or “high” dose when it comes to muscimol? A quick google search will yield a range of anywhere from 5 milligrams up to 90, as the dose it takes to feel get a high. According to a study published in Pharmacia in 2020, “Only 53 mg of muscimol were sufficient to produce psychoactive effects when ingested, while a dose of 93 mg produces a strong inebriation, including vomiting” in human volunteers.

That said, the one time I tried muscimol (in gummies) I took 2.5 gummies over a 90-minute period and each gummy contained 350 mg of muscimol (totaling 875mg). I definitely felt a unique high that I had not experienced before, but no visuals and certainly no negative physical side effects like nausea or vomiting. For me, it was a fun yet relaxing experience, somewhat dissociative in nature, with a wonderfully warm and tingly feeling body high, and a bit of auditory enhancement. It’s something I would definitely do again, and in higher doses.

As a matter of fact, next time I plan on taking more to reach some of the more intense levels of hypnotic/dissociative effects that many others have described. Take this Reddit user for example who details the “comforting body high, strong anxiolytic properties, insane music enhancement, the dream potentiation, the feeling of unity with nature and the ‘Amanita Hum’. The amanita hum is a humming you hear, that has this extremely natural, comforting character to it, and if you listen to music, it tunes itself to the music, which makes stuff like drone music absolutely phenomenal.”

Now that sounds like a perfect way to spend the afternoon.

Aside from eating dried amanita mushrooms or pre-manufactured gummies, another common way to utilize muscimol by vaping it. Some people also like to use it in combination with other psychedelics, since it’s said to take the edge off and ease the anxiety that can come along with taking serotonergic drugs.

What about ibotenic acid?

Most people who describe negative experiences and unpleasant side effects from amanita muscaria also usually report having eating the caps, rather than some type of prepared products. This means they consumed more ibotenic acid than muscimol, which is likely what led to them feeling the way they did.

Ibotenic acid is a neurotoxin and potent agonist of group I and group II metabotropic glutamate receptors, specifically at both the N-methyl-D-aspartate, or NMDA, and trans-ACPD receptor sites. It functions by cutting off communication between neurons across a synapse, essentially changing the way the nervous system functions, if only temporarily.

Ibotenic acid is a secondary metabolite that converts to muscimol via decarboxylation, which is a chemical reaction that removes a carboxyl group and releases carbon dioxide (CO2), typically through the application of heat. If amanita products are prepared in a way that converts at least 70 percent (ideally more) of the ibotenic acid to muscimol, then the consumer is much less likely to experience any negative symptoms.

Whether you opt for classic psilocybin or trending (and legal) muscimol is up to you, but what’s great about the time we live in is that we have options. While these compounds are both psychoactive and they both come from mushrooms, in my limited experience, the effects are very different. I enjoyed them both, but I think for more regular, day-to-day use, I would choose muscimol; whereas for a true psychedelic experience, I’m still going with psilocybin, hands down.

Have you tried musimol? What about psilocybin? Which one did you prefer? Join the discussion by dropping us a line in the comment section below, we love to hear from our readers!

Welcome all! Thanks for joining us today at Cannadelics.com; a news site where we work hard to bring you the best reporting from the cannabis and psychedelics spaces. Drop by regularly to stay updated on everything going down, and subscribe to the Cannadelics Weekly Newsletter, so you’re never late to get the news.